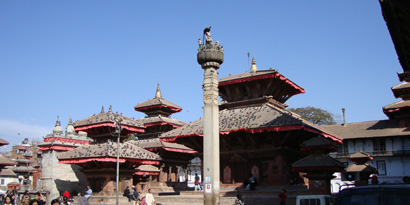 The home of the UNESCO world heritage sites, Kathmandu also known as Kantipur is the capital of Nepal and Kathmandu Durbar Square was the palace. Here you’ll find ‘The Living Goddess’ acknowledging the greetings of devotees from the balcony of her temple residence; Durbar Square with an array of temples overlooked by the Hanuman Dhoka Palace, with its sitting place called Kasthamandap (from which the name Kathmandu was derived). It is said that Kasthamandap was made from the timber of a single tree. This whole area reflects the ancient place of the Nepalese Royalty. 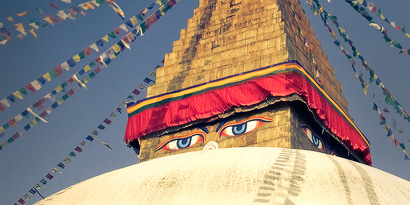 UNESCO world heritage site: Swyambhunath is located approx. 4 km/2.5 miles away from the center of the city lays this Buddhist stupa which is said to be 2000 years old. The stupa which forms the main structure of this stupa is composed of a solid hemisphere of bricks and earth supporting a lofty conical spire capped by a pinnacle of copper gilt. Painted on the four-sided base of the spire are the all-seeing eyes of Lord Buddha. This hill demonstrates the mosaic arts of small Chaityas and Pagoda temples. 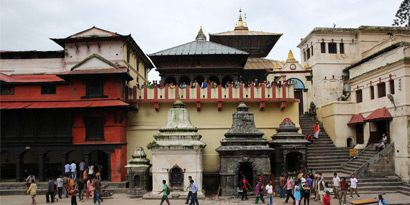 UNESCO world heritage site Situated 5 km east of the center of Kathmandu. Pashupatinath temple is one of the holiest temples dedicated to the Hindu Lord Shiva. Located amidst a lush green natural setting on the bank of the sacred Bagmati river, the temple built in pagoda style has a tilted roof and richly carved silver doors. Visitors will be permitted to view the temple from the east bank of Bagmati river, as the entrance into the temple is strictly forbidden to all non-Hindus. Pashupatinath is the center of an annual pilgrimage on the day of Shivaratri which falls in the month of February/March. Behind the temple is the cremation ground that many Hindus in Kathmandu chose for their funeral ceremony. 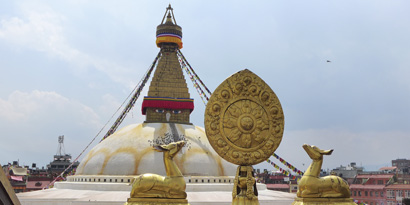 UNESCO world heritage site Boudhanath stupa located 8 km east of Kathmandu city is one of the biggest stupas in the world. It stands with four pairs of eyes in the four cardinal direction keeping watch for righteous behavior and human prosperity. This Buddhist stupa was built by King Man Deva at the advice of the Goddess Mani Jogini. It is built on an octagonal base inset with prayer wheels. The shrine is ringed by houses of Lamas or Buddhist priest.

Patan:
UNESCO world heritage site, this ancient city of Patan also known as Lalitpur or the city of fine arts is about five kilometers southeast of Kathmandu. The city is full of Hindu temples and Buddhist monuments. The major tourist attractions of Patan are: 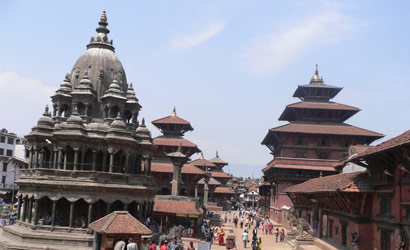 Patan Durbar Square:
Patan Durbar Square, situated in the heart of the city, is the main focus and visitor's attraction. The square is full of ancient palaces, temples and shrines, noted for their exquisite carvings. The Patan Durbar square consists of three main chowks or courtyards, the central Mul Chowk, Sundari Chowk, and Keshav Narayan Chowk. The Sundari Chowk holds in its center a masterpiece of stone architecture, the Royal bath called Tushahity.

Krishna Temple:
Built in the seventeenth century, the Krishna Temple holds a commanding position in the palace complex of Patan. It is supposed to be the first specimen of Shikhara style architecture in Nepal. It is the only temple in Nepal having 21 spires and is completely made of stone.

Golden Temple:
This three-storey golden pagoda of Lokeshwar in Patan was built in the twelfth century AD by King Bhaskar Varma. Located in the courtyard of Kwabahal, this temple is in a class of its own. A golden image of Lord Buddha and a big prayer wheel can be seen on the pedestal of the upper part of the Car while intricate decorative patterns on its outer walls add charm to the mellow richness of the shrine. 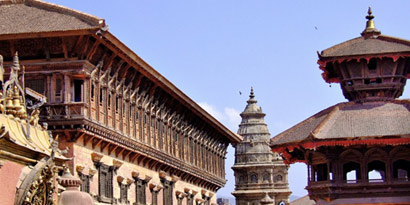 The Golden Gate:
The Golden Gate is said to be the most beautiful and richly molded specimen of its kind in the entire world. The door is surmounted by a figure of goddess Kali and Garuda (the mythical man-bird) and attended by two heavenly nymphs. It is also embellished with mythical creatures of marvelous intricacy. In the words of Percy Brown, an eminent English art critic, and historian, the Golden Gate is the loveliest piece of art in the whole country. It is placed like a jewel, flashing innumerable facets in the handsome setting of its surroundings.

The Fifty-five windows' Palace:
This magnificent palace was built during the reign Of King Yakshya Malla in 1427 AD and was subsequently remodeled by King Bhupatindra Malla in the seventeenth century. Among the brick walls with their gracious setting and sculptural design, is a balcony with fifty-five windows, considered to be a unique masterpiece of woodcarving. 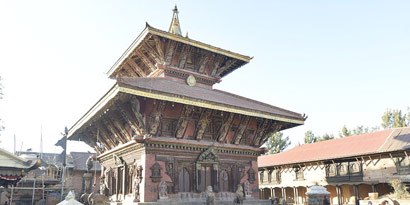 Changu Narayan Temple Complex:
Narayan, or Vishnu, is the preserver of creation to Hindus. His temple near Changu village is often described as the most ancient temple in the Kathmandu Valley. A fifth century stone inscription, the oldest to be discovered in Nepal, is located in the temple compound and it tells of the victorious King Mandev. The temple now covers sixteen hundred years of Nepalese art history. The temple, built around the third century, is decorated by some of the best samples of stone, wood, and metal craft in the Valley. In the words of one tourist guide, "When you look upon Changu Narayan Temple, you observe the complete cultural development of the Valley.

Shivapuri National park:
Popular as trekking, hiking and recreation area, the Shivapuri National Park offers the nearest retreat away from the hubbub of city life. The park was established as a Watershed and Wildlife Reserve in 1976. the park was declared as a national park in 2003 for the protection of its unique natural adornments. Vegetation varieties in the park include its 129 species of mushrooms while animals include 19 species of mammals include beer, leopard, deer, wild boar, wildcat and langur monkey. The park also boasts of 177 species of birds and 102 species of butterflies. Only 12 kilometers away from Kathmandu, the gateway to Shivapuri National Park is Budhanilkantha which is 15 to 20 minutes drive away from the city. Another option is via Sundarijal which is about 30 to 45 minutes drive from Kathmandu. From both Budhanilkantha and Sundarjal, the park requires trekking uphill. Yet another way to reach Shivapuri is by driving till Kakani from where the park is an hour trek.