Pokhara (827m)
Pokhara (827m) is a place of remarkable natural beauty outside Kathmandu. The serenity of Phewa Lake and the magnificence of the fishtailed summit of Machhapuchhre (6,993m) rising behind it create an ambiance of peace and magic. At an elevation lower than Kathmandu, it has a much more tropical feel to it, a fact well appreciated by the beautiful diversity of flowers which prosper in its environs. Indeed, the valley surrounding Pokhara is home to thick forests, gushing rivers, emerald lakes, and of course, the world-famous views of the Himalaya which makes it must-see places outside Kathmandu.

Mountain Views
Clearly the most stunning of Pokhara's sights is the spectacular panorama of the Annapurna range which forms its backdrop. Stretching from east to west, the Annapurna massive includes Annapurna I to IV and Annapurna South (7,219m). Although the highest among them is Annapurna I (8,091m), it is Machhapuchhre (Fishtail) which dominates all others in this neighborhood. Boastfully levitating in the skyline, the fish-tailed pinnacle is the archetypal snow-capped, needle-pointed mountain. If you want to see the mountains from close up, Everest Air offers a mountain flight from Pokhara that takes you on an aerial sightseeing tour of the western Himalaya.

Phewa Lake
Phewa Lake, the second largest lake of the country, is the center of all attraction in Pokhara. It is the largest and most enchanting of the three lakes that add to the resplendence of Pokhara. Here, one can sail or row a hired boat across to the water or visit the island temple in its middle. The eastern shore, popularly known as Lakeside or Baidam, is the favorite home base for travelers and is where most of the hotels, restaurants, and handicraft shops are located. 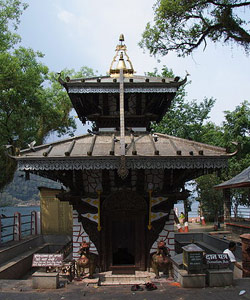 Barahi Temple
The Barahi Temple is the most important monument in Pokhara. Built almost in the center of Phewa Lake, this two-storyed pagoda is dedicated to the boar manifestation of' Ajima, the protester's deity representing- the female force Shakti. Devotees can be seen, especially on Saturdays, carrying male animals and fowl across the lake to be sacrificed to the deity.

Seti River gorge
Another of Pokhara's natural wonders that unfailingly interests visitors is the Seti Gandaki river. Flowing right through the city, the boisterous river runs completely underground at places. Amazingly, at certain points, the river appears hardly two meters wide. But its depth is quite beyond imagination over 20 meters! Mahendra Pul, a small bridge near the old Mission Hospital, provides a perfect view of the river's dreadful rush and the deep gorge made by its powerful flow.

Devi's Fall
Locally known as the Patale Chhango (Hell's Fall). Devi's Fall (also known as Devin's and David's) is a lovely waterfall lying about two km south-west of the Pokhara airport on the Siddhartha Highway. Legend has it that a trekker (Devin, David..) was washed away by the Pardi Khola and mysteriously disappeared down into an underground passage beneath the fall.

Mahendra Cave
Another of nature's wonders in Pokhara is the Mahendra Cave (Gupha). This large limestone cave is locally known as the House of Bats, an apt name for it. A two-hour walk to the north of Pokhara, it is best to bring your own torch to see the stalactites and stalagmites, as well as the local winged residents. 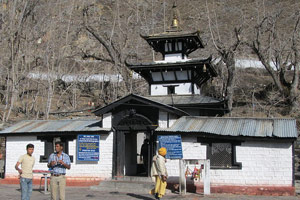 Muktinath
Muktinath at the height of 3,800 meters is one of the most important pilgrimage centers for both Hindus and Buddhists. The most prominent shrine is the Vishnu temple where 108 spouts pour forth water considered to be holy from the uniquely fashioned shape of cow heads. This water is channeled from a stream running above the temple built in Tibetan style and contains huge brass idols of Vishnu, Shiva, Brahma, and Kali. Nearby is another temple where water gushes out of a rock and this water is considered even more holy. There is also a Buddhist Gompa (monastery), and a pagoda-type temple dedicated to Jwala Mayi (goddess of fire). This temple shielded by curtains has the existence of outlets for natural gas that oozes from the rock and feeds the temple flame.

Gorkha
Gorkha is a scenic hill- town with great historical significance. In the middle of the eighteenth century, there were hundreds of small kingdoms and principalities in what is today's Nepal. The great Prithvi Narayan Shah took the mammoth task of unifying Nepal in the eighteenth century. The Gorkha soldiers under his dynamic leadership eventually succeeded in conquering the Kathmandu valley. The capital of greater Nepal was shifted to Kathmandu since then. But this beautiful township has always remained as the center of attraction for many Nepalese as well as foreign visitors. 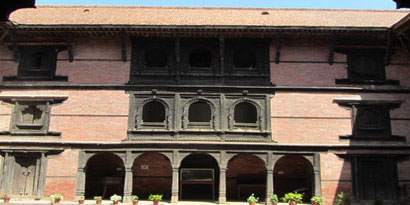 Gorkha Durbar
The historical palace: Gorkha Durbar is situated on the top of the fortified hill above the township, about one hour's walk uphill from the bus station. On the west side of the palace is the temple of Goddess Gorakhkali. There is also a famous cave sheltering the statue of Gorakhnath Baba (sage). It is believed that the name of Gorkha was derived from the name of this sage, whose blessings inspired King Prithvi Narayan Shah for the unification of Nepal. From the top of the hill above Gorkha palace and from a saddle east of the bazaar, the view of Manaslu and Himalchuli is spectacular.

Bandipur
Bandipur is an ancient trading town of quaint streets & charming atmosphere. It is situated on a ridge top south of Dumre which lies 135 km out of Kathmandu-Pokhara highway. Bandipur can be reached after a two-hour climb from Dumre. While the trading posts of the Nepali hills have modernized, Bandipur retains its age-old cultural attributes. It still has its temples, shrines, holy caves and a Newari architecture that harks back to the Kathmandu valley of old.

Lumbini
Lumbini is a Buddhist pilgrimage site in southwest Nepal. It was there, that the Lord Buddha was born. This is a cultural UNESCO world heritage site of Nepal. This pilgrimage site in southwest Nepal attracts devotees from around the globe, especially Buddhist arrive here to pay homage at the Sacred Garden and Mayadevi temple. Ashoka pillar, Mayadevi temple and various architecturally beautiful temples, stupas, and monasteries built by various international communities are the physical attractions of this peace destination. Lumbini is one among four notable pilgrimage sites of Buddhism.